An in-situ Heavy Oil Production facility in Canada wanted to increase steam production through their existing Once Through Steam Generators (OTSGs) to increase oil production without increasing water plant throughput. The increased production would result in higher steam quality (steam/boiler water ratio), which would increase the total dissolved solids (TDS) content and pH in the OTSG boiler water.

There was a concern that the OTSGs would experience increased scaling due to the higher TDS present in the OTSGs’ boiler water at higher steam qualities.

To manage the risk of scaling the OTSGs, Veolia began a deposition monitoring program examining ion deposition rates in the boilers. This data was used to monitor the effectiveness of the chemical treatment programs used for the boilers, shown in Figure 2.

Veolia determined that relying on chelant alone for scale control would not be effective at the higher boiler pH’s and TDS loading, and proposed moving to a new dispersant focused program. A new boiler polymer designed by Veolia specifically for OTSGs was evaluated. Solus CL35 is a blend of chelant and patented terpolymer, which has been shown to be very effective in controlling scaling in comparison with industry standards. 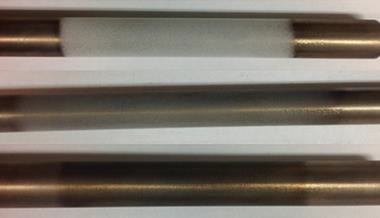 This process change allowed for the customer to safely operate their steam generators at higher steam quality of 85% from the previous average of 74%, increasing productivity by over 10%. This led to an increase in steam production without increasing their water treatment plant throughput, saving over 14,000,000 USG per year of make-up water.