A North American food processing plant with a 65 million gallon treated water lagoon was facing solids dredging to improve pond capacity. The pond had 69% of its capacity lost due to impounded solids, with solids built up also in an adjacent receiving pond. This required bypassing influent to another pond before returning that back to the receiving pond due to mechanical issues.

Pond maintenance was planned, including dredging, but Veolia was contacted for input on options to improve conditions in the pond moving forward. After a site audit, the pond sludge composition was identified as high in organic composition. A solution utilizing Veolia’s BioPlus BA3903 was proposed to strategically add to the pond. A trial using the BioPlus BA3903 product was started on one area of the pond to determine removal efficacy.

BioPlus BA3903 contains a specially formulated blend of naturally occurring, but adapted, high-performance microorganisms, together with some enzymes and nutrients for low dissolved oxygen (DO) conditions. The product was developed for use in the biological degradation of organic industrial sludge accumulated at the bottom of lagoons. BioPlus BA3903 is formulated as weighted ‘spikes’ which are applied over a broad area to reduce the overall sludge layer in a lagoon. The application can be at higher dosages in problem areas for faster sludge reduction. A plan to evaluate a section of the lagoon was established, and measurements made to determine the volume of sludge in that test area.

BioPlus BA3903 was applied at recommended dosages. In the test area, 15 feet of sludge was initially measured. Ten days later, the second addition of BioPlus BA3903 was added after measurements showed a reduction of sludge depth from 15 to 2 feet in one area and 8 feet to 2½ feet depth in an adjacent area of the lagoon. The results from several areas of the lagoon are shown in the graph in Figure 1. 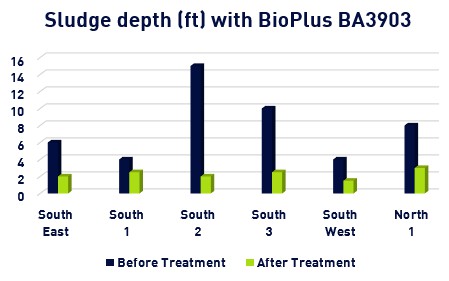 Figure 1:  Sludge depth changes with treatment in noted areas of the lagoon

The evaluation has been deemed successful by the plant manager, and further treatment is planned elsewhere in the pond system where sludge buildup has occurred over time. The customer has not dredged any area since the evaluation, and further monitoring to identify key areas of the lagoon to treat will occur prior to additional treatment.

After initial reductions, it is recommended to continue a maintenance program for future additions to control the buildup of sludge early on instead of waiting for it to build up in the lagoon system. Routine performance monitoring will be implemented to show treatment efficacy further.

Had dredging been required to clean the lagoon system instead of using BioPlus BA3903, it would have cost over $700,000 in contractor fees. A savings of over $625,000 will be realized thanks to Veolia’s treatment.