A trip to your local grocery store tells the story: consumers are becoming increasingly more aware of the food they eat, are demanding organic food options, and the available options have quickly grown from a small dedicated section to organic options in every food category and grocery aisle.

Many organic food manufacturing processes require steam, which is generated by processing water through a boiler. This feedwater is typically treated with chemicals to prevent naturally occurring contaminants, such as carbon dioxide and dissolved oxygen, from causing corrosion failures in the plant’s steam distribution system.

As the steam transfers heat to the process and surrounding environment, it condenses back into liquid water, and contaminants such as carbon dioxide, and dissolved oxygen can cause corrosion of the metal surfaces on the steam distribution, and condensate recovery systems.

The corrosion of metal steam contact surfaces can cause several serious issues where the steam is used for organic food manufacturing. These include premature equipment failure, loss of thermal efficiency due to the accumulation of metal corrosion products on heat transfer surfaces, and perhaps most seriously, the transport of metallic corrosion products to the organic food products where the steam is used directly in the process.

The typical steam condensate corrosion inhibitors, many of which are compliant with US FDA regulations for direct steam food contact, such as volatile organic amines, and surface filming inhibitors, are not compliant with the USDA National Organic Program guidelines for organic food production. USDA accredited certifying agencies who verify compliance for organic food manufacturers will not approve these materials as steam additives where there is direct contact of steam with the organic food. Therefore, many plants that manufacture organic food products elect to not treat their condensate systems, which exposes their systems to serious operational risks.

Steamate FM1007 was developed to effectively and safely treat condensate systems in plants that manufacture organic food products. The proprietary corrosion inhibitor in the Steamate FM1007 is compliant with the National Organic Program as defined by USDA 7 CFR 205.606 for non-organically produced agricultural products utilized in organic food processing where contact with the food substance is made.

A major US-based cereal manufacturer made the decision to pursue organic certification for one of their cereal brands. As a result of an audit conducted by an accredited organic certifying agency, they were required to discontinue application of their longstanding steam condensate corrosion inhibitor.

Veolia’s proposed submission of the new Steamate FM1007 product for approval by the site’s organic certifying agency. The product was reviewed and approved for organic food production, and a trial protocol was developed.

The key performance parameter required by the customer for trial success was maintenance of steam condensate iron levels consistently below 0.30 ppm as Fe.

The key comparative steam condensate data for the incumbent treatment and the Steamate FM1007 program are summarized in Figures 1 and 2 below. As shown, the mean condensate iron level on the incumbent filming steam treatment based on more than 100 data points was 0.090 ppm, while for Steamate FM1007 the mean iron level was slightly higher at 0.125 ppm, which was still well below the required limit of 0.30 ppm. 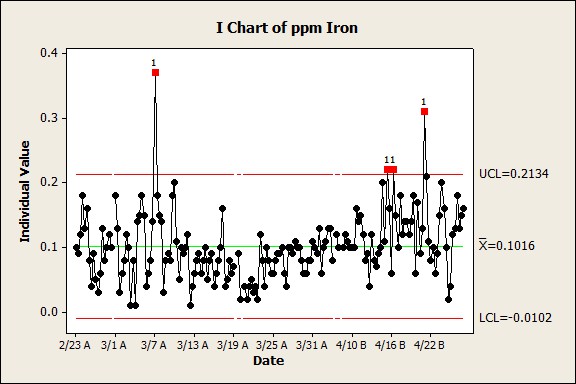 As mentioned above, highly alkaline and conductive boiler water contacting the steam system surfaces will de-stabilize the protective film formed by Steamate FM1007. The film will be re-established rapidly following carryover incidents, but corrosion protection will be temporarily compromised to some extent. 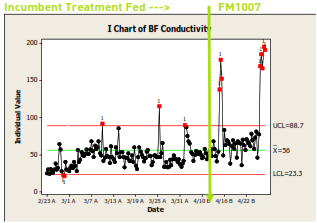 As the trial of Steamate FM1007 progressed, a comparison of the level of corrosion protection provided by Steamate FM1007 was made at multiple steam condensate sample points with comparison to an untreated condition. Notably, boiler water carryover was well controlled during this period.

As illustrated in Figure 3 below, high levels of corrosion, as expected, occurred with no anti-corrosion treatment added. The average iron level recorded at the four condensate sample sites was 5.0 ppm as Fe, which is much higher than the recommended ASME feedwater limit of 0.1 ppm for a boiler operating in this pressure range.

With Steamate FM1007 treatment, the average iron level in the condensate was 0.10 ppm as Fe, with three of the four sample sites below 0.1 ppm. 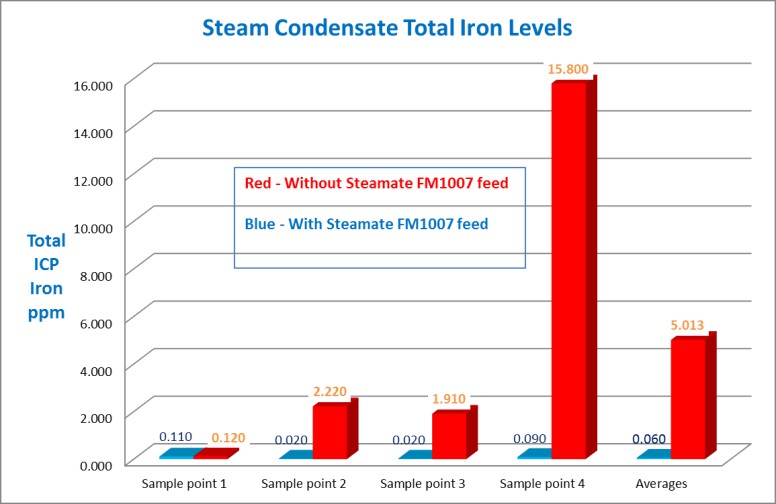 Based on the results of this trial, Steamate FM1007 was approved as an ongoing application at this and two other organic branded cereal production facilities by this customer.

Steamate FM1007 is the only direct steam additive that we are aware of that has been approved by multiple organic certifying agencies where the steam directly contacts the organic food product.