ZeeLung is an innovative solution that maximizes the treatment capacity from existing tank volumes while also reducing energy consumption. Conventional solutions require the construction of new tanks and other process intensification technologies are complex and energy-inefficient. ZeeLung, on the other hand, is a simple solution that increases treatment capacity in existing assets and reduces energy.

During secondary treatment, bacteria metabolize nutrients and organics – and need a flow of oxygen to get it done. Oxygen is typically pumped through diffusers to create bubbles. But most of the oxygen rises to the surface without being used and valuable energy is wasted. At SUEZ, we saw a new approach. While conventional solutions require the construction of new tanks, ZeeLung increases treatment capacity in existing assets and reduces energy use. ZeeLung enables process intensification and process resilience. The result is expanded treatment capacity, stabilized cold-temperature performance and rapid response to load changes. 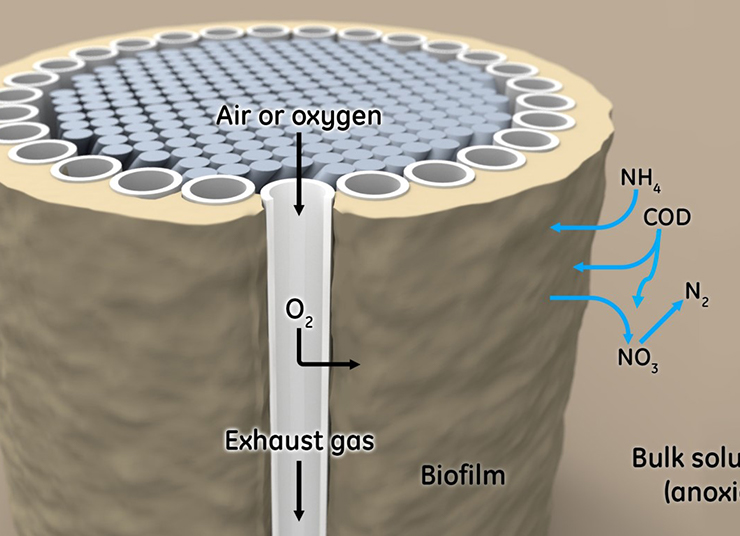 ZeeLung technology employs a gas permeable media to deliver oxygen to a biofilm that is attached to the surface of the media. Oxygen is delivered to the biofilm by diffusion – without the use of bubbles. The result is 4X lower energy consumption for oxygen transfer than fine bubble aeration. Pollutants, such as ammonia and organics, diffuse from the bulk solution into the biofilm where bacteria in the biofilm have optimal conditions to remove them.

The product is a reinforced media with a yarn-based core supporting multiple gas permeable filaments. This construction – referred to as a “cord” – is flexible yet unbreakable.  Multiple cords are potted into top and bottom headers to create a module and modules are installed in a steel frame that forms a cassette. Cassettes are deployed in the mixed liquor in a biological reactor. Low-pressure air is delivered to the cassettes for transfer of oxygen and mixing of the system. 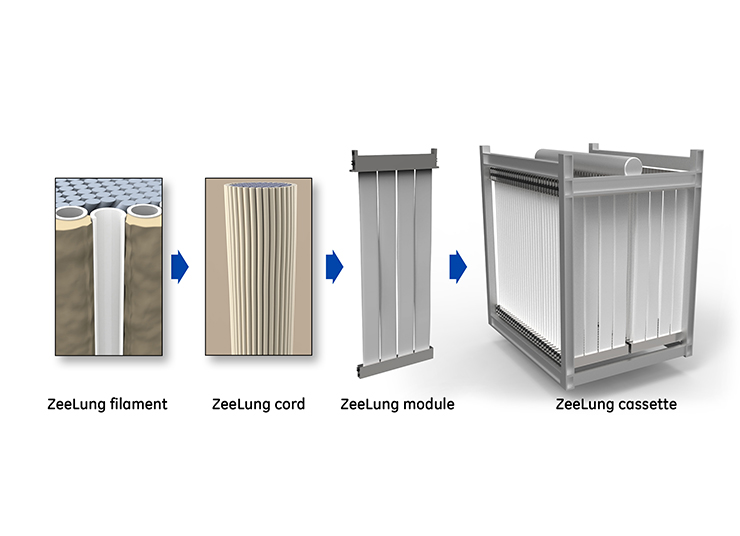 Installing ZeeLung cassettes into an activated sludge reactor increases the inventory of biomass in the system without increasing the mixed liquor concentration. As a result, the same reactor volume has more treatment capability.

The process interaction of oxygen and pollutants is different in a ZeeLung system compared to conventional active sludge and biofilm processes. With ZeeLung, oxygen and substrates – such as ammonia and organics – enter the biofilm from opposite sides in a counter-diffusion configuration. This creates conditions that favor the growth of nitrifiers in the biofilm. 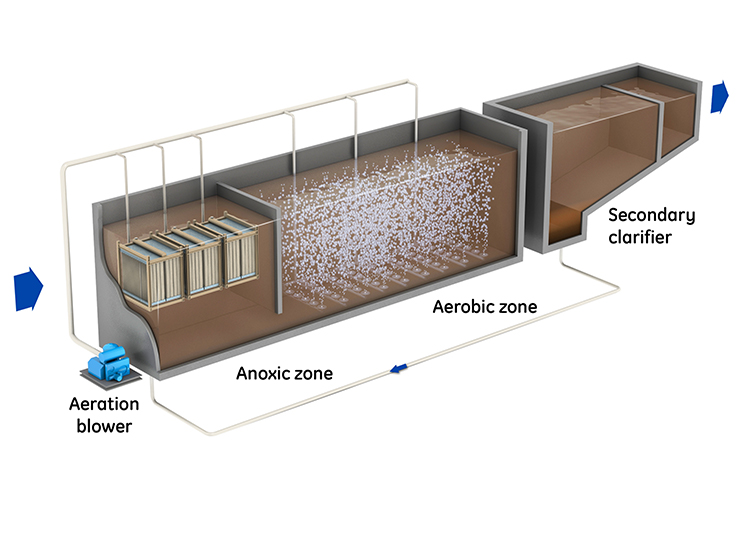 This can be explained by the high diffusivity of ammonia into a biofilm, as compared to organic substrates, and the availability of dissolved oxygen which is highest at the media surface. Preferential growth of nitrifiers versus heterotrophs means that the ZeeLung biofilm “supercharges” nitrification in an activated sludge system. Simultaneous nitrification and denitrification can be achieved by installing ZeeLung cassettes in an anoxic zone.

ZeeLung cassettes are simply deployed into existing tanks with minimal impact on the existing equipment and operations. This makes ZeeLung a cost-effective and versatile solution for augmenting plant performance. 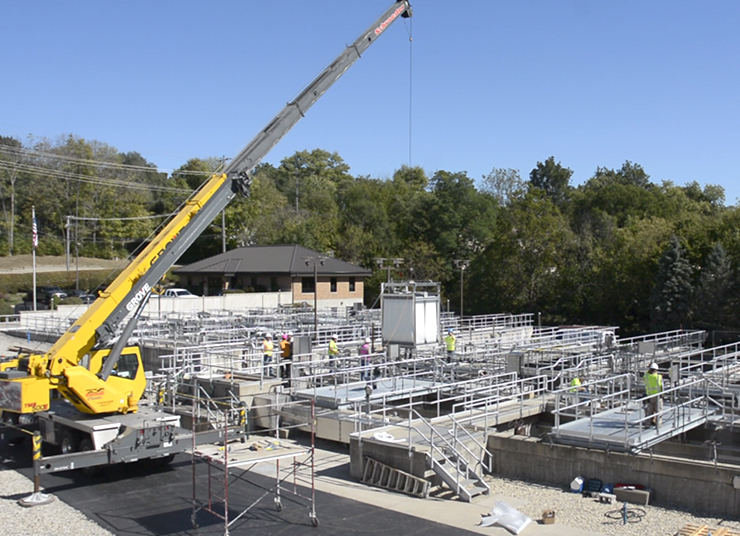 The Yorkville-Bristol Sanitary District (YBSD) provides wastewater collection and treatment services for the City of Yorkville, Illinois, population 18,000.  With the plant operating near the design organic load, YBSD sought a cost-effective solution to accommodate new industries planning to move into the city. Increasing treatment capacity of the existing facility would avoid the need to build a new treatment plant and therefore reduce the cost to YBSD’s rate payers. The plant also wanted a solution that would address future regulations regarding phosphorous discharge.  YBSD selected ZeeLung* technology to upgrade its treatment plant. The upgraded plant is designed to enable increased treatment capacity within the existing footprint while also reducing the plant’s energy consumption.

With the goal of becoming energy neutral by 2023, the Metropolitan Water Reclamation District of Greater Chicago conducted a demonstration project to evaluate SUEZ's ZeeLung* technology. The equipment was installed at the district’s O'Brien Water Reclamation Plant in Skokie, Illinois, to prove ZeeLung’s ability to remove nutrients in the plant’s existing footprint and reduce the energy required for biological aeration by 40 percent. 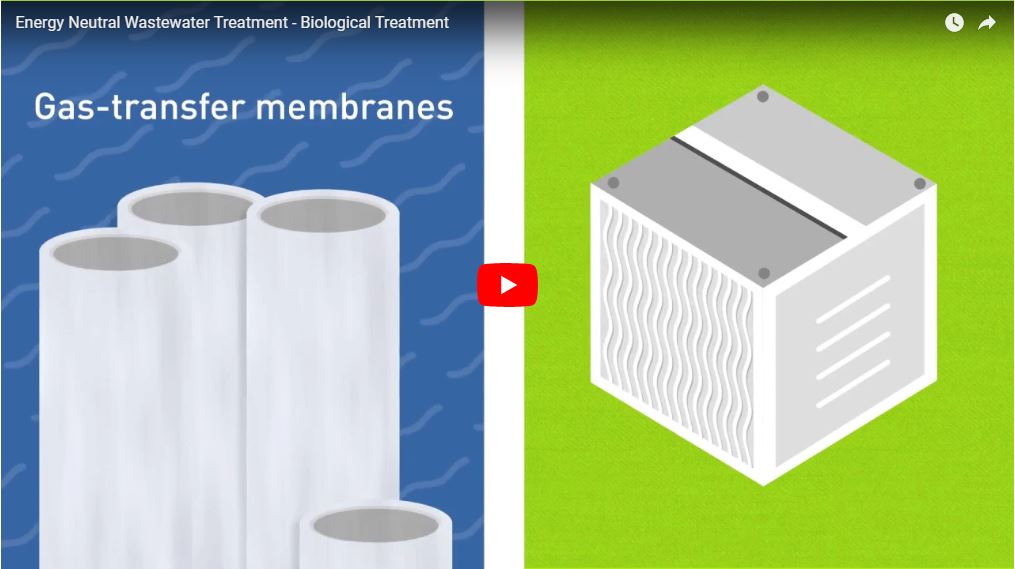 This article details the results of the year-long demonstration of ZeeLung technology at the Metropolitan Water Reclamation District of Greater Chicago.

If you'd like to talk with a sales representative about purchasing SUEZ's products and services, you can reach us here.

For more information, including technical papers, case studies, and product specs, search for ZeeLung in the Document Library.

Go to the document library