Aeration is a unit process in which air and water are brought into intimate contact. Turbulence increases the aeration of flowing streams (Figure 4-1). In industrial processes, water flow is usually directed countercurrent to atmospheric or forced-draft air flow. The contact time and the ratio of air to water must be sufficient for effective removal of the unwanted gas.

Aeration as a water treatment practice is used for the following operations:

Aeration is also an effective method of bacteria control.

Two general methods may be used for the aeration of water. The most common in industrial use is the water-fall aerator. Through the use of spray nozzles, the water is broken up into small droplets or a thin film to enhance countercurrent air contact.

In the air diffusion method of aeration, air is diffused into a receiving vessel containing counter-current flowing water, creating very small air bubbles. This ensures good air-water contact for "scrubbing" of undesirable gases from the water.

Many variations of the water-fall principle are used for this type of aeration. The simplest configuration employs a vertical riser that discharges water by free fall into a basin (Figure 4-2). The riser usually operates on the available head of water. The efficiency of aeration is improved as the fall distance is increased. Also, steps or shelves may be added to break up the fall and spread the water into thin sheets or films, which increases contact time and aeration efficiency.

Coke tray and wood or plastic slat water-fall aerators are relatively similar in design and have the advantage of small space requirements.

Coke tray aerators are widely used in iron and manganese oxidation because a catalytic effect is secured by contact of the iron/manganese-bearing water with fresh precipitates. These units consist of a series of coke-filled trays through which the water percolates, with additional aeration obtained during the free fall from one tray to the next.

Wood or plastic slat tray aerators are similar to small atmospheric cooling towers. The tray slats are staggered to break up the free fall of the water and create thin films before the water finally drops into the basin.

Forced draft water-fall aerators (see Figure 4-3) are used for many industrial water conditioning purposes. Horizontal wood or plastic slat trays, or towers filled with packing of various shapes and materials, are designed to maximize disruption of the falling water into small streams for greater air-water contact. Air is forced through the unit by a blower which produces uniform air distribution across the entire cross section, cross current or countercurrent to the fall of the water. Because of these features, forced draft aerators are more efficient for gas removal and require less space for a given capacity.

Air diffusion systems aerate by pumping air into water through perforated pipes, strainers, porous plates, or tubes. Aeration by diffusion is theoretically superior to water-fall aeration because a fine bubble of air rising through water is continually exposed to fresh liquid surfaces, providing maximum water surface per unit volume of air. Also, the velocity of bubbles ascending through the water is much lower than the velocity of free-falling drops of water, providing a longer contact time. Greatest efficiency is achieved when water flow is countercurrent to the rising air bubbles.

In industrial water conditioning, one of the major objectives of aeration is to remove carbon dioxide. Aeration is also used to oxidize soluble iron and manganese (found in many well waters) to insoluble precipitates. Aeration is often used to reduce the carbon dioxide liberated by a treatment process. For example, acid may be fed to the effluent of sodium zeolite softeners for boiler alkalinity control. Carbon dioxide is produced as a result of the acid treatment, and aeration is employed to rid the water of this corrosive gas. Similarly, when the effluents of hydrogen and sodium zeolite units are blended, the carbon dioxide formed is removed by aeration.

In the case of cold lime softening, carbon dioxide may be removed from the water before the water enters the equipment. When carbon dioxide removal is the only objective, economics usually favor removal of high concentrations of carbon dioxide by aeration rather than by chemical precipitation with lime.

Iron and manganese in well waters occur as soluble ferrous and manganous bicarbonates. In the aeration process, the water is saturated with oxygen to promote the following reactions:

The oxidation products, ferric hydroxide and manganese dioxide, are insoluble. After aeration, they are removed by clarification or filtration.

Gases dissolved in water follow the principle that the solubility of a gas in a liquid (water) is directly proportional to the partial pressure of the gas above the liquid at equilibrium. This is known as Henry's Law and may be expressed as follows:

Ctotal     =  total concentration of the gas in solution

However, the gases frequently encountered in water treatment (with the exception of oxygen) do not behave in accordance with Henry's Law because they ionize  when dissolved in water. For example:

Carbon dioxide, hydrogen sulfide, and ammonia are soluble in water under certain conditions to the extent of 1,700,  3,900, and 531,000 ppm, respectively. Rarely are these concentrations encountered except in certain process condensates. In a normal atmosphere, the partial pressure of each of these gases is practically zero. Consequently, the establishment of a state of equilibrium between water and air by means of aeration results in saturation of the water with nitrogen and oxygen and nearly complete removal of other gases.

As the equations above show, ionization of the gases in water is a reversible reaction. The common ion effect may be used to obtain almost complete removal of these gases by aeration. If the concentration of one of the ions on the right side of the equation is increased, the reaction is driven to the left, forming the gas. In the case of carbon dioxide and hydrogen sulfide, hydrogen ion concentration may be increased by the addition of an acid. Bicarbonate and carbonate ions in the water will form carbon dioxide, which can be removed by aeration.

In a similar manner, an increase in hydroxyl ion concentration through the addition of caustic soda aids in the removal of ammonia.

Figures 4-4, 4-5, and 4-6 show the percentage of gas removal that may be obtained at various pH levels.

Gas removal by aeration is achieved as the level of gas in the water approaches equilibrium with the level of the gas in the surrounding atmosphere. The process is improved by an increase in temperature, aeration time, the volume of air in contact with the water, and the surface area of water exposed to the air. As previously indicated, pH is an important consideration. The efficiency of aeration is greater where the concentration of the gas to be removed is high in the water and low in the atmosphere.

Temperature significantly affects the efficiency of air stripping processes. Therefore, these processes may not be suitable for use in colder climates. Theoretically, at 68°F the carbon dioxide content of the water can be reduced to 0.5 ppm by aeration to equilibrium conditions. This is not always practical from an economic standpoint, and reduction of carbon dioxide to 10 ppm is normally considered satisfactory.

Although removal of free carbon dioxide increases the pH of the water and renders it less corrosive from this standpoint, aeration also results in the saturation of water with dissolved oxygen. This does not generally present a problem when original oxygen content is already high. However, in the case of a well water supply that is high in carbon dioxide but devoid of oxygen, aeration simply exchanges one corrosive gas for another.

The efficiency of aeration increases as the initial concentration of the gas to be removed increases above its equilibrium value. Therefore, with waters containing only a small amount of carbon dioxide, neutralization by alkali addition is usually more cost-effective.

The complete removal of hydrogen sulfide must be combined with pH reduction or chemical oxidation.

Nonvolatile organic compounds cannot be removed by air stripping. For example, phenols and creosols are unaffected by the aeration process alone. 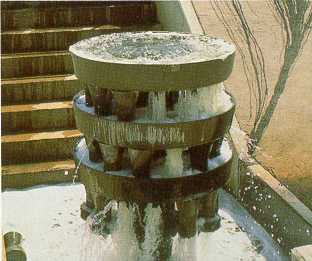 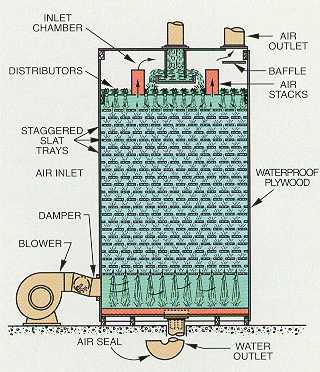 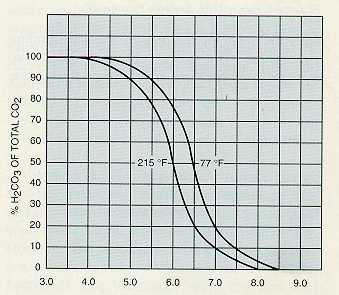 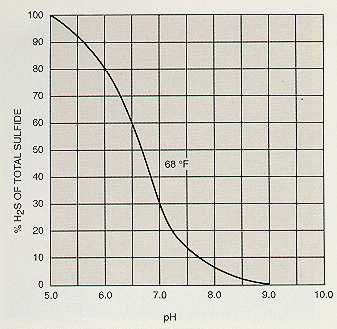 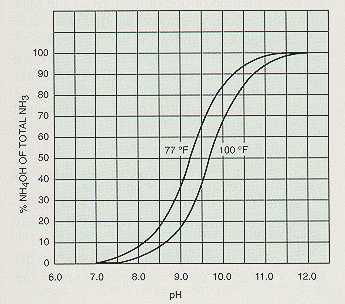