The dissolved gases normally present in water cause many corrosion problems. For instance, oxygen in water produces pitting that is particularly severe because of its localized nature. Carbon dioxide corrosion is frequently encountered in condensate systems and less commonly in water distribution systems. Water containing ammonia, particularly in the presence of oxygen, readily attacks copper and copper-bearing alloys. The resulting corrosion leads to deposits on boiler heat transfer surfaces and reduces efficiency and reliability.

In order to meet industrial standards for both oxygen content and the allowable metal oxide levels in feedwater, nearly complete oxygen removal is required. This can be accomplished only by efficient mechanical deaeration supplemented by an effective and properly controlled chemical oxygen scavenger.

Several principles apply to the mechanical deaeration of feedwater:

Vacuum deaeration has been used successfully in water distribution systems. However, pressure deaeration (with steam as the purge gas) is normally used to prepare boiler feedwater. Steam is chosen as the purge gas for several reasons:

In order to deaerate the boiler feedwater, water is sprayed into a steam atmosphere. This heats the water to within a few degrees of the temperature of the saturated steam. Because the solubility of oxygen in water is very low under these conditions, 97 to 98% of the oxygen in the incoming water is released to the steam and is purged from the system by venting. Although the remaining oxygen is not soluble under equilibrium conditions, it is not readily released to the steam. Therefore, water leaving the heating section of the deaerator must be scrubbed vigorously with steam to maximize removal.

The purpose of a deaerator is to reduce dissolved gases, particularly oxygen, to a low level and improve a plant's thermal efficiency by raising the water temperature. In addition, deaerators provide feedwater storage and proper suction conditions for boiler feedwater pumps.

Pressure deaerators, or deaerating heaters, can be classified under two major categories: tray-type and spray-type (see Figure 10-3). Tray-type deaerators are also referred to as "spray-tray" type, because the water is initially introduced by spray valves or nozzles. The spray type is also referred to as the "spray-scrubber" type because a separate scrubbing section is used to provide additional steam-water contact after spraying.

The tray-type deaerating heater, shown in Figures 10-4 and 10-5, consists of a shell, spray nozzles to distribute and spray the water, a direct-contact vent condenser, tray stacks, and protective interchamber walls. Although the shell is constructed of low carbon steel, more corrosion-resistant stainless steels are used for the spray nozzles, vent condenser, trays, and interchamber walls.

The operation of this deaerator is illustrated in Figure 10-5. Incoming water is sprayed into a steam atmosphere, where it is heated to within a few degrees of the saturation temperature of the steam. Most of the noncondensable gases (principally oxygen and free carbon dioxide) are released to the steam as the water is sprayed into the unit. Seals prevent the recontamination of tray stack water by gases from the spray section.

In the tray section, water cascades from tray to tray, breaking into fine droplets or films which intimately contact the incoming steam. The steam heats the water to the saturation temperature of the steam and removes all but the very last traces of oxygen. Deaerated water falls to the storage space below, where a steam blanket protects it from recontamination.

The steam, entering the deaerators through ports in the tray compartment, flows down through the tray stack parallel to the water flow. A very small amount of steam condenses in this section as the water temperature rises to the saturation temperature of the steam. The remainder of the steam scrubs the cascading water.

Upon leaving the tray compartment, the steam flows upward between the shell and the interchamber walls to the spray section. Most of the steam is condensed and becomes a part of the deaerated water. A small portion of the steam, which contains the noncondensable gases released from the water, is vented to the atmosphere. It is essential that sufficient venting is provided at all times or deaeration will be incomplete.

Steam flow through the tray stack may be cross-flow, counter-current, or co-current to the water. The deaerated water is usually stored in a separate tank, as illustrated in Figure 10-4.

The incoming water is sprayed into a steam atmosphere and heated to within a few degrees of the saturation temperature of the steam. Most of the noncondensable gases are released to the steam, and the heated water falls to a water seal and drains to the lowest section of the steam scrubber.

The water is scrubbed by a large volume of steam and heated to the saturation temperature prevailing at that point. The intimate steam-water contact achieved in the scrubber efficiently strips the water of dissolved gases. As the steam-water mixture rises in the scrubber, the deaerated water is a few degrees above the saturation temperature, due to a slight pressure loss. A small amount of flashing results, which aids in the release of dissolved gases. The deaerated water overflows from the steam scrubber to the storage section below.

Steam enters the deaerator through a chest on the side and flows to the steam scrubber. Because the volume of steam is large compared to the volume of water, thorough scrubbing is achieved. The steam, after flowing through the scrubber, passes up into the spray heater section to heat the incoming water. Most of the steam condenses in the spray section to become a part of the deaerated water. A small portion of the steam is vented to the atmosphere to remove the noncondensable gases.

In the jet-atomizing segment of spray-type deaerators, the incoming water is sprayed into a steam atmosphere. Here, the water is heated sufficiently to release the majority of the noncondensable gases. The water is then delivered into a high-velocity steam jet. It impinges on a baffle and is atomized into fine droplets. The high-velocity steam heats the water to its saturation temperature and scrubs all but the last traces of oxygen from the fine water droplets.

In film-type deaerators, the water flows along a surface, such as Raschig rings, in a thin film counter-current to steam flow. Oxygen is removed along the film surface. Water is collected at evenly spaced intervals.

In a bubbling device deaerator, oxygen is removed following preheating of the water, through intimate contact of steam and water moving over perforated plates.

In power generating stations, main turbine condensers have air ejectors to remove dissolved gases. Sometimes the pressure deaerator is omitted from the feedwater cycle. However, there is a danger of air leaking into the system, both during start-up/shutdown and while the condensers are operating at low loads. This may necessitate steam blanketing and increased chemical deaeration.

Vacuum deaeration is used at temperatures below the atmospheric boiling point to reduce the corrosion rate in water distribution systems. A vacuum is applied to the system to bring the water to its saturation temperature. Spray nozzles break the water into small particles to facilitate gas removal and vent the exhaust gases.

Incoming water enters through spray nozzles and falls through a column packed with Raschig rings or other synthetic packings. In this way, water is reduced to thin films and droplets, which promote the release of dissolved gases. The released gases and water vapor are removed through the vacuum, which is maintained by steam jet eductors or vacuum pumps, depending on the size of the system. Vacuum deaerators remove oxygen less efficiently than pressure units. A typical vacuum deaerator is shown in Figure 10-7.

Inlet water to the deaerators should be largely free from suspended solids, which can clog spray valves and ports of the inlet distributor and the deaerator trays. In addition, spray valves, ports, and deaerator trays may plug with scale which forms when the water being deaerated has high levels of hardness and alkalinity.

Pressure deaerators reduce oxygen to very low levels. Yet even trace amounts of oxygen may cause corrosion damage to a system. Therefore, good operating practice requires supplemental removal of oxygen by means of a chemical oxygen scavenger such as sodium sulfite or hydrazine, or other materials, such as organic, volatile oxygen scavengers.

Vacuum deaerators, used to protect water distribution lines, are not designed to deaerate as thoroughly as pressure deaerators. Usually, they reduce the oxygen content to about 0.25 to 0.50 cm3`/L (330 to 650 ppb).

It is good practice to check the operation of the unit regularly. Care should be taken to ensure that the unit is not operated beyond its capacity. The system should also be checked for water hammer and thermal stress, which can be caused by the introduction of cold condensate. Thorough off-line inspection should be performed as often as possible and should include the following: 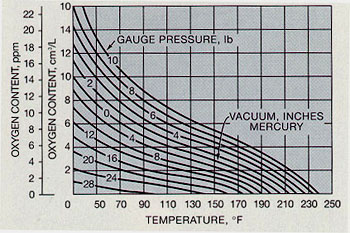 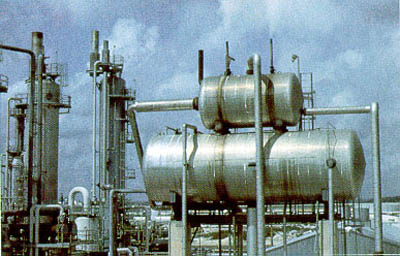 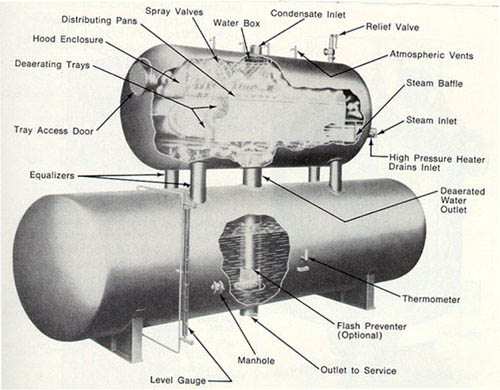 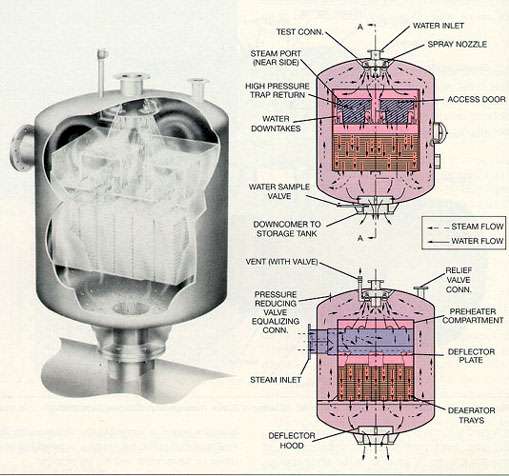 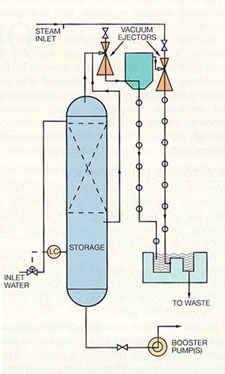