Impurities in fuels can cause deposit formation and fireside metal surface corrosion. Compounds of aluminum, barium, copper, iron, magnesium, manganese, and silica have all been used to control combustion fouling and corrosion. The most severe problems are generally found in combustion equipment firing fuels that significantly deviate in composition from the fuel on which the equipment design was based.

SOURCE AND NATURE OF FIRESIDE DEPOSITION

Sulfur emission regulations have severely restricted the use of high sulfur oils. Generally, high sulfur oils (greater than 1.0% sulfur) have high ash contents. These oils are usually imported from the Caribbean area. Prior to 1972, most East Coast boilers were burning high sulfur, high ash oils.

Vanadium reacts with oxygen to form various oxides in the furnace. When formed, vanadium pentoxide condenses within the furnace when gas temperatures approach its solidification point.

Sodium also reacts with oxygen and sulfur trioxide to form fouling compounds. Thermo-dynamics favor the formation of sodium sulfate rather than the relatively unstable sodium oxide.

Nickel can also contribute to deposition by forming oxides. Aluminum can be present in the oil in the form of cracking catalyst fines (aluminum that is introduced during the refining of oil). Although it is generally not a troublesome component, iron is occasionally present in fuels at relatively low levels. When waste fuels are burned, some contaminants (such as lead) can cause extremely dense and tenacious deposits.

Black liquor has been used as a boiler fuel for many years in the Kraft paper industry. It contains a significant amount of combustible material, along with sodium salts. Black liquor burning can produce relatively adherent, low bulk density sodium sulfate deposits on recovery boiler convective surfaces. In some instances, it is advisable and economically beneficial to control or limit deposition with magnesium-based additives. These materials are blended compounds which contain magnesium oxide and/or aluminum oxide.

Combustion of solid fuels such as coal and bark (also referred to as "hog fuel") can also lead to fireside slagging. Sodium, calcium, silica, iron, and sulfur content are of primary concern in the burning of solid fuels. Other metal oxides, such as alumina, titania, and potassium oxide, can also aggravate slagging. Figure 21-2 shows a heavy accumulation of slag in a coal-fired boiler.

In addition to proper boiler furnace design, operational considerations should be explored to prevent fireside slagging. Ash fusion testing has been used by boiler manufacturers to assess slagging potential (see Figure 21-3). Where design and operational improvements are impractical or insufficient, chemical treatments (such as combustion catalysts and antifoulants) should be considered.

Fuel additives are intended to control fouling by forming a friable, nonadherent deposition that can be removed by soot blowing.

When melting temperatures are raised, the physical characteristics of the deposits are altered. Often, the heaviest deposition occurs in areas where the gas temperature is lower than the melting temperature of a deposit. Therefore, a treatment program designed solely to elevate the melting point of the deposit will not solve the problem, and it is necessary to introduce additive components that change the physical characteristics of the deposit, making it more friable. Additives used for this purpose contain compounds of magnesium or aluminum. Aluminum is usually the most effective material for increasing friability of deposits.

Newer technology has been developed that offers certain advantages over magnesium or magnesium/aluminum combination treatments. Silicon-based materials have been used to control fouling and form friable nonadherent oxides. The silicon component acts like a sponge to adsorb low melting point oxides, preventing their agglomeration and subsequent deposition. The silicon-based materials contribute far fewer solids than traditional treatment. This reduces fouling and minimizes loading on the solids collection system.

Additive dosage should be fixed at the minimum level necessary for proper conditioning of depo-sits. Overfeeding of additives, particularly magnesium oxide, can cause troublesome deposition. Magnesium oxide can react with sulfur trioxide in the flue gas to form magnesium sulfate deposits. These deposits generally form in convection areas, such as primary superheaters, steam generating sections, and economizers.

Boiler design has proven to be a very important consideration in the determination of magnesium additive levels. The addition of aluminum to magnesium-based additives reduces magnesium sulfate deposition.

The greatest need for fuel additives to control deposition is in boilers previously used to fire other fuels, such as natural gas or coal. Generally, units used to fire coal have sufficient soot blower placement for adequate removal of properly conditioned deposits.

Natural gas-burning units generally do not have the desired soot blowing equipment. It is advisable to contact the manufacturer so that the proper number of soot blowers and their location can be specified. It is virtually impossible to burn a fuel containing greater than 0.2% ash without the use of soot blowers, even with the aid of a conditioning additive.

Boilers designed for oil firing incorporate design parameters that allow for relatively trouble-free operation from a fireside standpoint. Combustion gas velocity, tube spacing, furnace gas exit temperature, and economizer configuration are adjusted to account for oil ash characteristics. The most common problems associated with oil-design boilers are air preheater fouling and corrosion. Deposition and corrosion can occur when the oil used is of lesser quality than specified for the boiler, or if multiple oils are used.

Fuel ash corrosion in high-temperature areas can cause extensive boiler damage. The corrosion is caused principally by complex oxide-slags with low melting points. Corrosion by slag components, such as sodium vanadyl vanadate, progresses rapidly between 1100 and 1650°F.

Sodium sulfate is also a primary corroding medium that can be present with sodium vanadyl vanadate. It also is the primary corroding material of gas turbine blades. High-temperature corrosion can proceed only if the corroding deposit is in the liquid phase and the liquid is in direct contact with the metal. The liquid-phase deposits corrode by fluxing of the protective oxide layer on the metal surface as shown in Figure 21-1. Deposits also promote the transport of oxygen to the metal surface. Corrosion is caused by the combination of oxide layer fluxing and continuous oxidation by transported oxygen.

Tube spacers, used in some boilers, rapidly deteriorate when oil of greater than 0.02% ash content is fired. Because these spacers are not cooled and are near flue gas temperatures, they are in a liquid ash environment. Fuel oil additives can greatly prolong the life of these components.

High-temperature corrosion caused by sulfidation is a common problem in gas turbines. The corroding medium is sodium sulfate. Sodium enters the gas turbine either with the fuel or combustion air. The sodium content of the fuel can be lowered by means of water washing. It is relatively difficult to remove all sodium-containing mists or particulates at the intake of the gas turbine. Due to salt water mist ingestion, blade sulfidation problems are common in gas turbines used for marine propulsion.

Reheating furnaces in the iron and steel industry have suffered wastage of metallic recuperators. The problem is more prominent where steel mills have converted reheat furnaces from natural gas to residual oil firing. The gas inlet temperature at the recuperator is high enough to provide an environment for high-temperature corrosion.

Firing of residual oil in refinery process heaters has caused numerous corrosion failures of convection tube support members. The tube supports are generally not cooled by water or air and, therefore, are at a temperature close to that of the gas. In some cases, tube supports fabricated from nickel and chromium alloys have been installed to alleviate this problem.

Additives containing magnesium and aluminum oxides have been successful in controlling these and other high-temperature corrosion problems. The additives function by elevating the melting point of the deposits. Enough magnesium oxide must be added to enable the metallic constituents to remain in the solid phase as they contact the metal surface.

In residual oil-fired equipment, it is often necessary to feed a 1:1 ratio of magnesium and vanadium to achieve low corrosion rates. This level of feed is generally higher than that which is necessary to control fouling.

Most soluble fuel additives contain metallo-organic complexes such as sulfonates, carbonyls, and naphthenates. These additives are in a very convenient form for feeding. Most dry fuel additive preparations are used to treat fuels with high ash content, such as coal, bark, or black liquor. Metal oxides are used for this purpose. 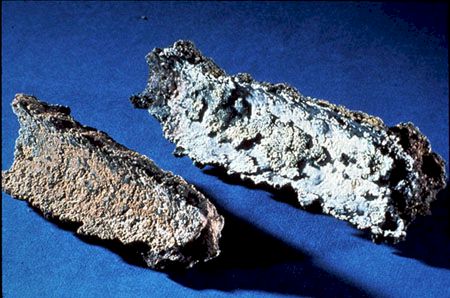 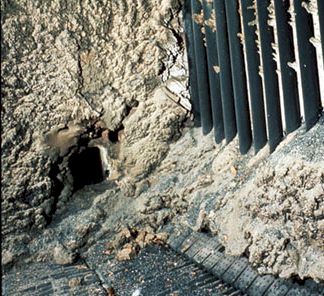 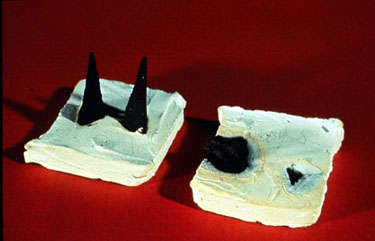 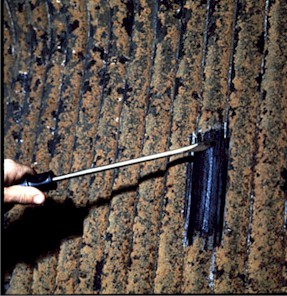