The development of modern, high-efficiency steam turbines has led to an increase in deposition, erosion, and corrosion problems. Close tolerances in the turbines, the use of high-strength steels, and impure steam all contribute to these conditions.

Although several factors influence the formation of deposits on turbine components, the general effect is the same no matter what the cause. Adherent deposits form in the steam passage, distorting the original shape of turbine nozzles and blades. These deposits, often rough or uneven at the surface, increase resistance to the flow of steam. Distortion of steam passages alters steam velocities and pressure drops, reducing the capacity and efficiency of the turbine. Where conditions are severe, deposits can cause excessive rotor thrust. Uneven deposition can unbalance the turbine rotor, causing vibration problems.

As deposits accumulate on turbine blades, stage pressures increase. Figure 18-1 shows the effect of gradual deposit buildup on stage pressure. The deposits were caused by the use of contaminated water to attemperate the steam. In a fouled condition, this 30-MW turbine lost over 5% of its generating capacity.

Turbine deposits can accumulate in a very short time when steam purity is poor. The turbine shown in Figure 18-2 was forced off-line by deposition only 3 months after it was placed in operation. Carryover of boiler water, resulting from inadequate steam-water separation equipment in the boiler, caused this turbine deposit problem.

The nature of silica deposits found on turbine blades varies greatly. Table 18-1 lists a number of silica compounds that have been identified in various studies of turbine blade deposition. Of these, amorphous silica (SiO2) is the most prevalent.

Vaporization of Boiler Water Salts. Another source of turbine deposition is the vaporization of salts present in boiler water. With the exception of silica, vaporization of boiler water salts is usually not significant at pressures below 2400 psig. Silica can vaporize into the steam at operating pressures as low as 400 psig. This has caused deposition problems in numerous turbines. The solubility of silica in steam increases with increased temperature; therefore, silica becomes more soluble as steam is superheated. As steam is cooled by expansion through the turbine, silica solubility is reduced and deposits are formed, usually where the steam temperature is below that of the boiler water. To minimize this problem, the quantity of silica in the steam must be controlled. Silica deposits are not a problem in most turbines where the silica content in the steam is below 0.02 ppm. Therefore, it has become customary to limit silica to less than 0.02 ppm in the steam. Sometimes, because of the more stringent operating conditions of certain turbines, vendors specify that steam silica be maintained at less than 0.01 ppm.

The conditions under which vaporous silica carryover occurs have been thoroughly investigated and documented. Researchers have found that for any given set of boiler conditions using demineralized or evaporated quality makeup water, silica is distributed between the boiler water and the steam in a definite ratio. This ratio, called the distribution ratio, depends on two factors: boiler pressure and boiler water pH. The value of the ratio increases almost logarithmically with increasing pressure and decreases with increasing pH. The effect of boiler water pH on the silica distribution ratio becomes greater at higher pH values. A pH increase from 11.3 to 12.1 reduces the ratio by 50%, while a pH increase from 7.8 to 9.0 has no measurable effect. For any boiler pressure and pH, the distribution ratio for silica can be determined from Figure 18-3. The amount of silica vaporized with the steam can be determined by measurement of boiler water silica. The proper boiler water silica level necessary to maintain less than 0.02 ppm silica in the steam is shown in Figure 18-4.

After steam reaches a turbine it expands, losing pressure and temperature. As a result, the solubility of the silica decreases. Studies have shown that with a maximum of 0.02 ppm of silica in the steam, a pressure of less than 200 psig is reached in the turbine before silica starts to condense from the steam. Therefore, silica preferentially deposits in the intermediate-pressure and low-pressure sections of the turbine where the specific volume of the steam varies from approximately 1 to 10 ft3/lb. Solubility data shown in Figure 18-5 helps to explain the distribution of silica deposits in the turbine.

Localized Silica Saturation. Turbine deposits are also formed where localized silica saturation occurs and silica condenses from the steam in those areas of the turbine. Partial evaporation of the precipitated silica can then occur with only a portion of the silica being dissolved by the continuous steam flow. Deposits remain as a result.

Turbine Velocity. Another factor affecting the location of turbine deposits is the velocity in the turbine. Steam flows from the inlet to the outlet of the turbine in only a fraction of a second. Consequently, deposition is shifted downstream from the saturation point by the high steam velocities.

The most significant factor in minimizing turbine silica deposits is the maintenance of low silica concentrations in the boiler water. External treatment equipment must be operated carefully to limit the amount of silica entering with the makeup water, and the condensate must be monitored to minimize contamination. After silica enters the boiler water, the usual corrective action is to increase boiler blowdown (to decrease the boiler water silica to acceptable levels) and then to correct the condition that caused the silica contamination.

When a turbine becomes fouled with water-soluble salts as a result of boiler water carryover or attemperating water contamination, turbine capacity can often be restored by water washing. Because it can cause severe turbine damage, water washing should be supervised carefully and the recommendations of the turbine vendor should be followed.

When the turbine becomes fouled with compounds that are not water-soluble (including silica), water washing rarely restores capacity. Out-of-service cleaning by blasting with aluminum oxide or other soft grit material is required to remove these deposits.

Erosion of turbine blades results in rough, uneven surfaces that alter steam flow paths. This reduces turbine efficiency and can also limit capacity. Erosion at the high-pressure end of a turbine is usually caused by solid particles (usually iron oxide) present in the steam. Iron oxide particles are present if they were not removed by steam blows during system start-up. They can also result from exfoliation of superheater or main steam header oxides or can be introduced into the steam by contaminated attemperating water.

Erosion of intermediate and low-pressure blades is usually caused by water in the steam. Operation below design inlet steam temperature or at low load can cause condensation in these stages, leading to erosion problems.

Carbon dioxide or other acidic species present in the condensate can accelerate the damage. Some protection against erosion-corrosion can be provided by low distribution ratio amines, which neutralize the acidity and elevate the pH of the condensate.

Pitting, corrosion fatigue, and stress corrosion cracking problems all occur in steam turbines. The major corrodents are sodium hydroxide, chloride, sulfate, and sulfides. Usually, the level of contaminants present in steam is not high enough to corrode the system components. As steam expands through a turbine, the solubility of contaminants in the steam decreases. They condense onto surfaces at solution concentrations much higher than the original contaminant concentration in the steam. These concentrated solutions promote system corrosion.

Pitting is commonly associated with chloride deposits and occurs on rotors, disks, and buckets. Pitting attack often occurs when a moist, oxygen-laden atmosphere develops in out-of-service turbines. Damage is most severe when chloride deposits are also present. An oxygen-free or condensate-free atmosphere should be maintained to protect out-of-service turbines from corrosion.

Corrosion fatigue and stress corrosion cracking of blades and disks are commonly associated with sulfides (see Figure 18-6), chlorides, and caustic. The problems are most common in low-pressure sections of large power plant turbines, which are characterized by high stresses, crevices, and operating temperatures conducive to the condensation of concentrated solutions of steam contaminants. Problems also occur in high-pressure sections and smaller industrial-sized turbines, usually when substantial levels of steam contamination occur. These problems can be mitigated by designs that prevent crevices, lower stresses, and/or employ lower-strength materials. It is also important to avoid unnecessary stresses and to maintain high-purity steam during operation. 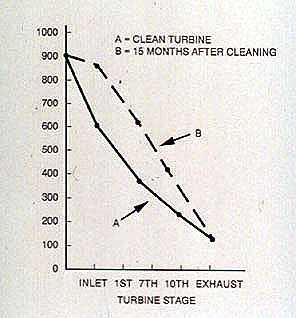 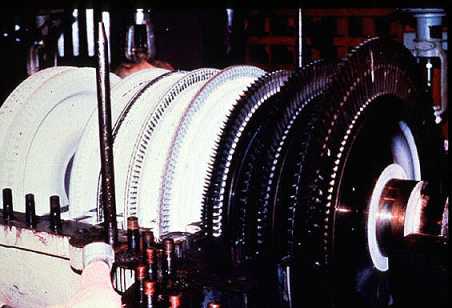 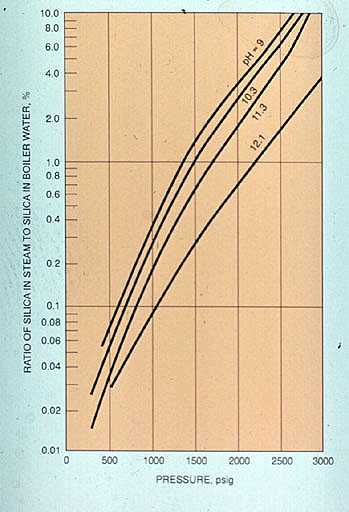 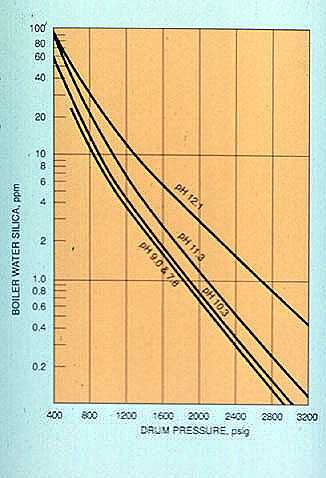 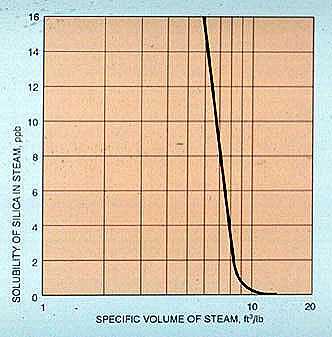 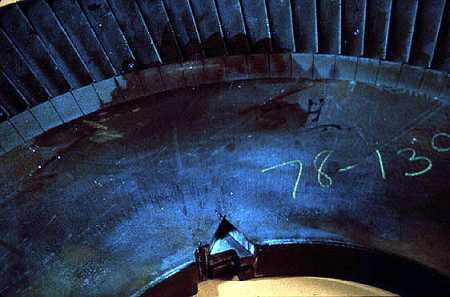