Cold-end corrosion can occur on surfaces that are lower in temperature than the dew point of the flue gas to which they are exposed. Air heaters and economizers are particularly susceptible to corrosive attack. Other cold-end components, such as the induced draft fan, breeching, and stack, are less frequently problem areas. The accumulation of corrosion products often results in a loss of boiler efficiency and, occasionally, reduced capacity due to flow restriction caused by excessive deposits on heat transfer equipment.

Acidic particle emission, commonly termed "acid smut" or "acid fallout," is another cold-end problem. It is caused by the production of large particulates (generally greater than 100 mesh) that issue from the stack and, due to their relatively large size, settle close to the stack. Usually, these particulates have a high concentration of condensed acid; therefore, they cause corrosion if they settle on metal surfaces.

The most common cause of cold-end problems is the condensation of sulfuric acid. This chapter addresses problems incurred in the firing of sulfur-containing fuels. Sulfur in the fuel is oxidized to sulfur dioxide:

Cold-end corrosion and deposition are usually much less severe in coal-fired boilers than in oil-fired units. Usually, coal ash is alkaline, so it increases the pH of the deposits formed in cold-end sections. Thus, the extent of the corrosive attack by sulfuric acid is diminished. Also, the high level of ash present when coal is fired results in a lower concentration of acid in the ash particle. At the same sulfur content, coal firing dew points are generally 20-40 degrees F lower than oil firing dew points.

The most common cause of deposition within air preheaters is the accumulation of corrosion products. Most air preheater deposits contain at least 60% iron sulfates formed by the corrosion of air heater tube metal. Therefore, a reduced corrosion rate frequently reduces the fouling of air preheaters.

Most modern regenerative air preheaters are equipped with steam or compressed air sootblowers and fixed or oscillating water washing nozzles. In boilers equipped with multiple units, individual air preheaters can be isolated and washed on-line. Suitable drain connections must be provided as well as a system for treating the wash water prior to disposal. Washing is generally continued until the pH of the wash water is above 4.5. The wash water effluent is a relatively low pH stream with a high soluble iron content. Most air preheaters are washed with untreated water. Some operators add caustic soda or soda ash to neutralize the deposits and lower the loss of air heater metal during washing.

Steam coil air preheaters are also installed when boilers are changed from coal or gas firing to oil firing. Steam coils are installed because oil firing requires maintenance of an air preheater average cold-end temperature that is higher than that normally specified for the firing of natural gas or coal. The operation of steam coil air preheaters results in an increase in the heat rate of the steam plant. Combustion air bypasses around the air heater and hot air recirculation have also been used to control average cold-end temperatures. Both of these methods reduce boiler efficiency.

The operation of a boiler at or below 5% excess air can result in a marked reduction in flue gas sulfur trioxide content and dew point. An experimentally determined relationship for one boiler is shown in Figure 22-2. The infiltration of air into the flame zone or into an area where the catalytic oxidation of sulfur dioxide is occurring increases the potential for cold-end problems. Therefore, maintenance and inspection procedures should be directed toward minimizing air infiltration.

When two fuels (such as coal and oil, oil and natural gas, or blast furnace gas and coke oven gas) must be fired simultaneously, certain ratios produce the highest dew points. The worst ratio on a Btu-fired basis is 1:1.

When a fuel is fired that has a higher hydrogen content than the base fuel normally used, the flue gas produced has a higher moisture content, resulting in an increased dew point. When possible, fuels of different hydrogen content should be fired separately. Figure 22-3 graphically depicts the influence on sulfuric acid dew point that results when natural gas and a sulfur-containing fuel are fired simultaneously in a single boiler.

Many chemical solutions have been devised to control cold-end deposition and corrosion. These solutions can be divided into two broad classifications: fuel additives and cold-end additives. Fuel additives are compounds that are added directly to the fuel or combustion process. Cold-end additives are fed into the back of the boiler after steam-generating surfaces so that they spe-cifically treat only the lower-temperature areas.

Magnesium and magnesium/aluminum based fuel additives are used to reduce sulfur trioxide in the flue gas. These compounds function primarily by altering the effectiveness of the iron and vanadium catalysts. They are fed to liquid fuels, most commonly residual fuel oil. Alkaline fuel oil additives, such as magnesium, also increase the pH of deposits formed on cold-end surfaces, thereby reducing corrosion.

Corrosion Inhibitors. Corrosion inhibitors can be added to the cold end of the boiler to alleviate problems associated with the condensation of sulfuric acid. These materials do not neutralize the sulfuric acid in the flue gas; they prevent surface corrosion where the sulfuric acid condenses. Fouling of the air preheater is reduced because the quantity of corrosion products is reduced. Although the dosage of inhibitor required to achieve the desired effect increases with increasing acid content in the flue gas, the relationship is not linear.

The compositions of inhibitor-type cold-end additives are usually proprietary. Products are available in powder and liquid form. Liquid solutions are injected upstream of the problem area with atomizing spray nozzles.

Justification for cold-end additives is generally based on the benefits obtained by higher unit heat rates and lower maintenance costs for the equipment in the cold-end section. The feed of cold-end additives enables the unit to operate with a lower rate of steam flow to the steam coil air preheaters, resulting in an increase in unit heat rate. If average cold-end temperature is controlled with bypasses, the bypassed air flow can be reduced so that an improvement in boiler efficiency is obtained. A smaller improvement in heat rate is gained through reduction of fan horsepower, which reduces the average pressure drop across the air preheater.

Acid Smut Control. Cold-end additives can be used to reduce acid smut problems. In some in-stances, it is believed that smut is created when fly ash particles agglomerate to form larger particles. These particles adsorb sulfuric acid mist and become highly acidic. Fly ash deposits often accumulate in low-temperature areas of breeching. During soot blowing or load changes, some of the deposited fly ash can be entrained in the flue gas stream and carried out the stack. The large particles then settle in the vicinity of the stack. Magnesium-based fuel additives have been beneficial in reducing acid smut problems by increasing the pH of the deposits.

Corrosion Rate Measurement. Various devices are available to assess the impact of additive application on corrosion rates. Table 22-1 shows a selection of monitoring methods. In some cases, problems in the breeching, induced draft fans, and stack can be measured by corrosion coupons placed within the flue gas stream.

The electrical conductivity dew point meter is useful in problem assessment work and some results monitoring. In addition to corrosion monitoring, this meter provides an indication of the deposition rate by measuring the increase in the conductance of an acid-containing film with respect to time. The electrical conductivity meter is acceptable for results monitoring only where a sulfur trioxide removal additive is used. The dew point meter is shown in Figure 22-5.

Normally, direct measurement of sulfur trioxide is used only for Environmental Protection Agency tests because of its cost and complexity. All of these evaluation techniques and tools are used by suppliers of proprietary cold-end treatments. They enable the engineer to define the problem and measure results properly. 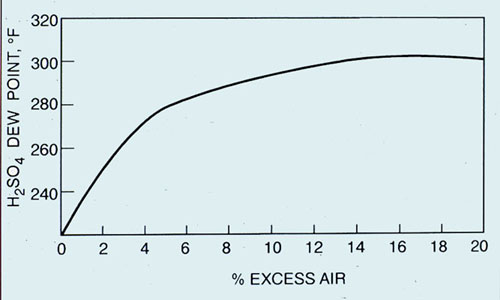 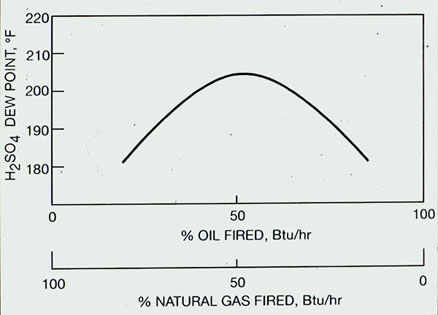 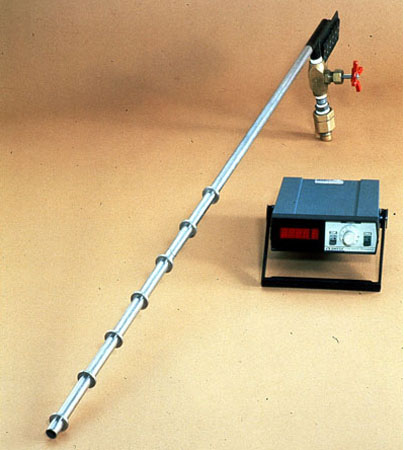 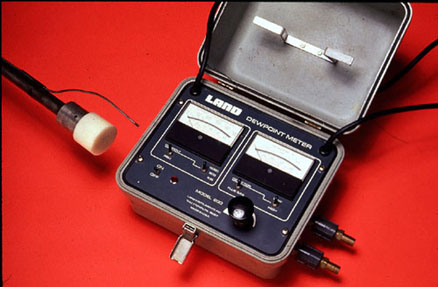