The function of a cooling system is to remove heat from processes or equipment. Heat removed from one medium is transferred to another medium, or process fluid. Most often, the cooling medium is water. However, the heat transfer concepts and calculations discussed in this chapter can also be applied to other fluids.

Efficient removal of heat is an economic requirement in the design and operation of a cooling system. The driving force for the transfer of heat is the difference in temperature between the two media. In most cooling systems, this is in the range of 10-200 degrees F. The heat flux is generally low and in the range of 5,000 to 15,000 Btu/ft2/hr. For exceptional cases such as the indirect cooling of molten metal, the heat flux can be as high as 3,000,000 Btu/ft2/hr.

The transfer of heat from process fluids or equipment results in a rise in temperature, or even a change of state, in the cooling water. Many of the properties of water, along with the behavior of the contaminants it contains, are affected by temperature. The tendency of a system to corrode, scale, or support microbiological growth is also affected by water temperature. These effects, and the control of conditions that foster them, are addressed in subsequent chapters.

Water heated in the heat exchange process can be handled in one of two ways. The water can be discharged at the increased temperature into a receiving body (once-through cooling system), or it can be cooled and reused (recirculating cooling system).

There are two distinct types of systems for water cooling and reuse: open and closed recirculating systems. In an open recirculating system, cooling is achieved through evaporation of a fraction of the water. Evaporation results in a loss of pure water from the system and a concentration of the remaining dissolved solids. Water must be removed, or blown down, in order to control this concentration, and fresh water must then be added to replenish the system.

A closed recirculating system is actually a cooling system within a cooling system. The water containing the heat transferred from the process is cooled for reuse by means of an exchange with another fluid. Water losses from this type of system are usually small.

Each of the three types of cooling systems-once-through, open recirculating, and closed recirculating-is described in detail in later chapters. The specific approach to designing an appropriate treatment program for each system is also contained in those chapters.

In the design of a heat transfer system, the capital cost of building the system must be weighed against the ongoing cost of operation and maintenance. Frequently, higher capital costs (more exchange surface, exotic metallurgy, more efficient tower fill, etc.) result in lower operating and maintenance costs, while lower capital costs may result in higher operating costs (pump and fan horsepower, required maintenance, etc.). One important operating cost that must be considered is the chemical treatment required to prevent process or waterside corrosion, deposits and scale, and microbiological fouling. These problems can adversely affect heat transfer and can lead to equipment failure (see Figure 23-1).

The following is an overview of the complex considerations involved in the design of a heat exchanger. Many texts are available to provide more detail.

Process heat duty, process temperatures, and available cooling water supply temperature are usually specified in the initial stages of design. The size of the exchanger(s) is calculated according to important parameters such as process and water flow velocity, type of shell, layout of tubes, baffles, metallurgy, and fouling tendency of the fluids.

Factors in the design of a heat exchanger are related by the heat transfer equation:

The rate of heat transfer, Q, is determined from the equation: Q = WC DT + WDH where

If the fluid does not change state, the equation becomes Q = WC DT.

The heat transfer coefficient, U, represents the thermal conductance of the heat exchanger. The higher the value of U, the more easily heat is transferred from one fluid to the other. Thermal conductance is the reciprocal of resistance, R, to heat flow.

The total resistance to heat flow is the sum of several individual resistances. This is shown in Figure 23-2 and mathematically expressed below.

r2 = heat flow resistance of the process-side fouling (if any)

r4 = heat flow resistance of the water-side fouling (if any)

The heat flow resistance of the process-side film and the cooling water film depends on equipment geometry, flow velocity, viscosity, specific heat, and thermal conductivity. The effect of velocity on heat transfer for water in a tube is shown in Figure 23-3.

Heat flow resistance due to fouling varies tremendously depending on the characteristics of the fouling layer, the fluid, and the contaminants in the fluid that created the fouling layer. A minor amount of fouling is generally accommodated in the exchanger design. However, if fouling is not kept to a minimum, the resistance to heat transfer will increase, and the U coefficient will decrease to the point at which the exchanger cannot adequately control the process temperatures. Even if this point is not reached, the transfer process is less efficient and potentially wasteful.

The resistance of the tube to heat transfer depends on the material of construction only and does not change with time. Tube walls thinned by erosion or corrosion may have less resistance, but this is not a significant change.

Heat transfer equations are useful in monitoring the condition of heat transfer equipment or the efficacy of the treatment programs. The resistance of the tube is constant; system geometry does not change. If flow velocities are held constant on both the process side and the cooling water side, film resistance will also be held constant. Variations in measured values of the U coefficient can be used to estimate the amount of fouling taking place. If the U coefficient does not change, there is no fouling taking place on the limiting side. As the exchanger fouls, the U coefficient decreases. Therefore, a comparison of U values during operation can provide useful information about the need for cleaning and can be utilized to monitor the effectiveness of treatment programs.

Heat exchangers are commonly designed for fouling factors of 0.001 to 0.002, depending on the expected conditions of the process fluid and the cooling water. 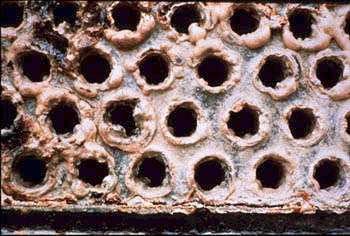 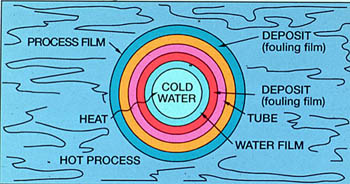 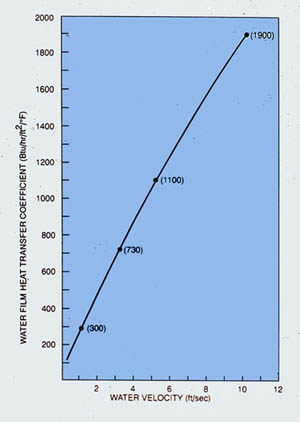